Many couples choose to add a Bridal Portrait Session at the Magic Kingdom to their wedding plans; however, many do not realize that you can also have photos taken at the other parks.  My husband and I decided to add-on a shoot at Disney Hollywood Studios too.  Since we were married inside Epcot that meant that we would have photos from three of the four parks at Walt Disney World. 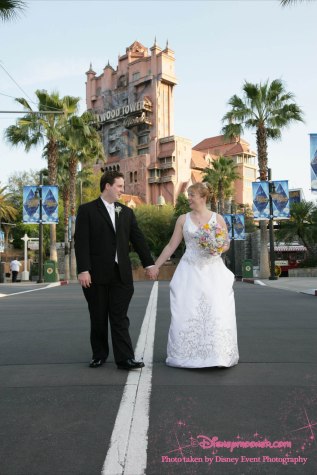 One of the best things about adding on an additional park is the flexibility you have in backgrounds for your photos.  The photographers are willing to be creative and work with you to get the types of pictures you want at that park.  The majority of couples only choose a Magic Kingdom Portrait Session, so adding on another park gives the photographers a chance to be more creative with their shots.

We were picked up at our resort hotel at 5:30 a.m. and then headed over to take our photos at the Magic Kingdom.  Since it was March this was well before sunrise allowing us to get some photos in the dark with the lights on the castle.  By the time we left the sun was up and we had some additional pictures taken in the daylight.

Our photographer and his assistant had us climb back in their van and then drove us over to Disney’s Hollywood Studios.  We arrived long before the park was scheduled to open to the public giving us the flexibility to take pictures throughout the park.  We entered in near the Rock ‘N’ Roller Coaster Starring Aerosmith making our first stop for photos.   My husband loves this ride, so we were able to get pictures with the large guitar at the park’s entrance behind us. 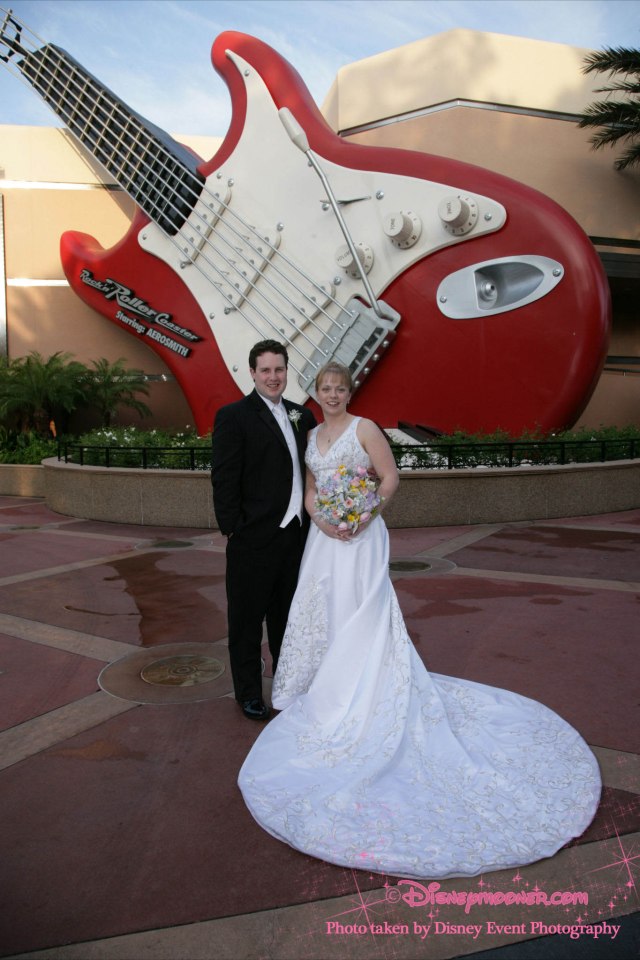 From that point we walked through most of the park.   We had a lot of great pictures taken with us walking down Sunset Boulevard with shots of the Twilight Zone Tower of Terror in the background.  We were also able to have photos taken with a vintage Hollywood feel in front of several of the shops on Hollywood Boulevard.

The photographer took a number of pictures in front of the Sorcerer Mickey Hat.  We also had photos in front of the Great Movie Ride since we were having a Hollywood theme for our at-home reception just a few months later.

At this point the photographer let us pick where we wanted additional pictures in the park.  Since I collect Wizard of Oz memorabilia I asked for a picture near the block dedicated to Judy Garland with imprints from the Ruby Slippers in front of the ride.

We then asked for some pictures in the courtyard for Muppet Vision 3-D.  I remembered looking at photos from fellow Disneymooner’s Julie wedding reception that was held in the courtyard and I knew that it would provide great pictures.  Plus, we grew up during the era of “Muppet Babies” and Miss Peggy was one of my favorite characters.

As we were leaving the Muppet courtyard the photographer took us over to the Streets of America to have some photos taken with the New York backdrop and near some of the buildings.  These photos are so unique because they look like we were actually in these locations without having to travel thousands of miles.

We were also given the option to have photos taken near the Star Tours ride.  Since neither of us are huge Star Wars fans we opted out of having any done in that section of the park.  However, this is a great thing to know for any Star Wars fans who would like to have wedding pictures there. 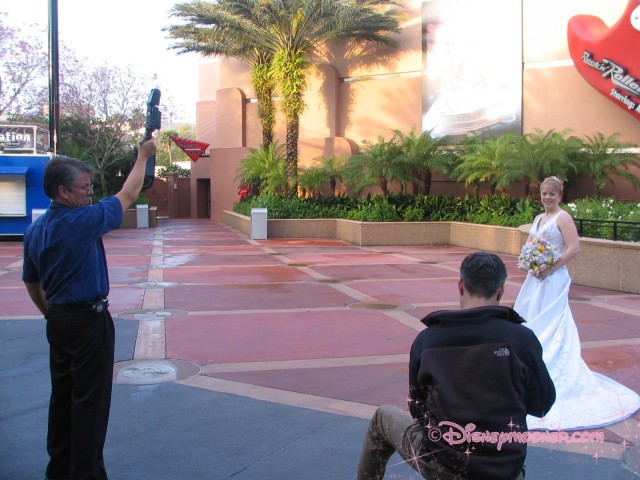 The current pricing for a Magic Kingdom Portrait Session is $1,500.  Adding on a second park only costs an additional $200.  While the cost is only $200 more, the prints that you receive do change with the two park package.  Instead of receiving a 12 print album, proof disc and 4×6 keepsake prints you receive thirty 5×7 prints in a Disney-themed album. 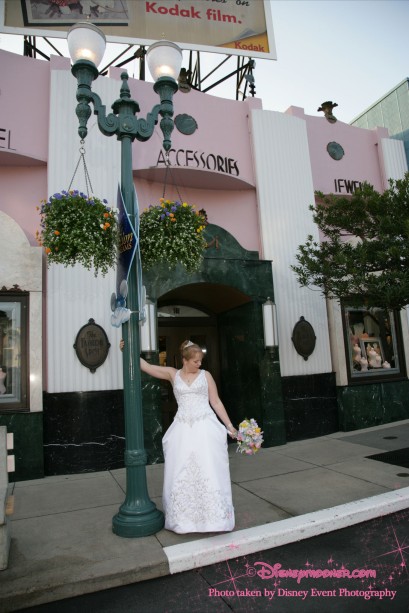 If you decide that you only want a portrait session in Epcot, Disney’s Hollywood Studios or Disney’s Animal Kingdom without any photos in the Magic Kingdom the cost is only $850.  Disney Fine Art Photography also provides options for resort portrait sessions and Trash the Dress sessions at the water parks.

Disney Fine Art Photography gives couples the chance to have photos taken in some of their favorite areas inside the Disney parks.  So, if you are a Star Wars or Muppets fan or you love riding the Twilight Zone Tower of Terror consider adding Disney Hollywood Studios to your portrait session.

Have something to say about this topic? Please share away: Cancel reply

Your Fairytale Wedding is not affiliated with, authorized or endorsed by, or in any way officially connected with; The Walt Disney Company, Disney Enterprises, Inc., or any of their affiliates.

Error: Twitter did not respond. Please wait a few minutes and refresh this page.